After her healing, Rita began spending time with Rhoda Wise.  Rhoda became a sort of spiritual mother to her, helping her grow in holiness.

“When the Lord came in and healed me … I had a whole different attitude. I knew that God knew me and loved me and was interested in me. I didn’t know that before.  All I wanted to do after my healing was give myself to Jesus.”  Mother Angelica to Raymond Arroyo  (see here)

Rita gradually expanded her prayer life.  On her way home from work or school she would stop at St. Anthony's Catholic Church and make the Stations of the Cross.  She felt the Lord call her to a deeper relationship as she gazed at the statue of Our Lady of Sorrows. 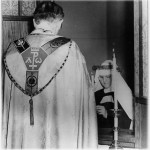 The sisters received a gift from John F. O’Dea Jr. He had built a 24-room Tudor mansion for himself and his wife, Ida. In August of 1945, the O’Deas offered the 15-acre estate to the Catholic Diocese of Youngstown as a site for Eucharistic Adoration. Within a year, the Poor Clares of Perpetual Adoration, cloistered nuns whose first American order was based in Cleveland, moved onto the grounds to expand their mission.

There are no products listed under this category.